Showing posts from July, 2013
Show all

Forbidden Fruit And Other Thoughts on Love 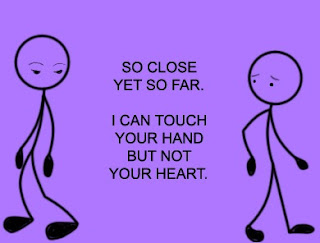 It is a theory that can be worded in so many different ways; "the grass is always greener on the other side".  As old it may be, it rings true especially in my current circumstance, partnered by that of many of my friends. Perhaps this poison draws us because we, as humans, are curious creatures. We often seek to learn more and discover the unknown. You are presented with both positive and negative possibilities when you seek to learn what you don't already know. But the root of that is simple curiosity, the desire to know more or to find out what you are not told. But why is this; why is it that we hold a stronger hunger pain for what we cannot obtain, as opposed to having a pure passion for what is in front of us?

You know those relationships that slip past you. Those people that always make you wonder, what could have been? We met in high school and I could have never imagined she would still mean anything to me as I approa…
Post a Comment
Read more

Keeping Up With Your Ex' s Family 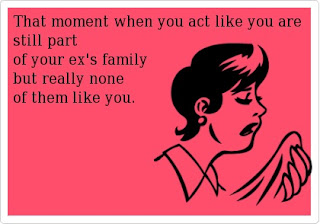 A breakup can be a really sensitive situation, especially when you and your ex have been together for quite a long time. Anything over two years ensures that the situation will not only include you two, but it also might include family and friends. Here is where it can get ugly...

During my first real relationship, I had gotten pretty close with my lovers family. They included me in family events, helped me spend more time with my then girlfriend and her mother even took me to get my hair done. Ill just say I loved her like a second mother.
Towards the end of our relationship I'd go and see her family even when she wasn't around because I did feel close to them, but I knew that this period couldn't last for too long. It's perfectly okay to keep in touch but lengthy visits and going out of my way to see them wasn't something I believed should continue. Today, I still make sure to always wish her mother a Happy Mother's Day because she is a great mom.
On the f…
Post a Comment
Read more

July 13, 2013
We cannot expect a justice system to fairly support a section of the population that it wasn't meant to protect.

Having black skin comes with a heavy burden. We can be seen as suspicious, troubled, and automatically guilty. Before Zimmerman left his car he profiled Trayvon Martin as a "thug", obviously up to no good. We can say this isn't about race, but if Trayvon was white he wouldn't have been seen as a threat.
The prosecution had the job of proving that Zimmerman had intended to kill Taryvon. They were to prove that Zimmerman sought out Trayvon to harm him. Unfortunately, the jury believed that was not the case.
Social media is a beautiful thing because it allows us to connect with people that may share similar interests with us. It also places us in contact with those that don't. As I try my best to avoid any debates on this situation, it's heartbreaking to come across people I know that feel that justice was served today. All that I can hope is th…
Post a Comment
Read more 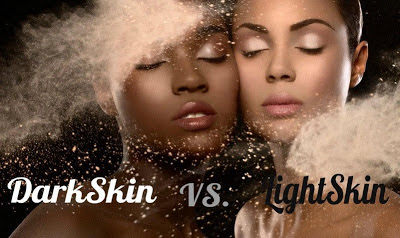 My family is made up of all the shades of black there are. Some of us are fairer than others and some of us are darker than others. I consider myself to be in the middle, a brown skin girl in my brown skin world. Through out my life I've been referred to as dark skin and light skin, neither of which made any difference in my self-esteem or self-worth. Skin color has NEVER been a factor to me.
Oprah's OWN Network premiered a documentary titled "Dark Girls" focusing on the experience of being a dark skin woman within a community that is self-loathing. These women shared stories of family members putting bleach in their bath water in hopes that their skin would lighten over time. These memories were implanted by their own families, and caused these women to feel ugly and worthless. Neither of which are true.
Recently, someone close to me has started making subtle comments revealing his distaste for dark skinned people. As a lighter skinned black man, I assume he feels …
Post a Comment
Read more
More posts
Visit profile

Here's how Urban Dictionary defines a "Hard Femme": "Not to be mistaken with the typical femme, the "hard femme" describes herself as "queer", is political, looks more feminine than masculine, and if prompted, can kick some serious ass. She doesn't need to "wear the pants" in a relationship- the hard femme rules with a dress. She not only despises the gender binary, she works to dismantle it."
Navigating the queer world can be difficult. As a whole we strive to eliminate labels and break stereotypes, but along the way we have only added to them. In the binary system of (cis)man and (cis)woman, there are also several subcategories, meant to only further define who we are as individuals.
For example, I could be considered many things: hard femme, stem(stud &femme), or a feminine aggressive. None of these things define who I am as a person but within the community these labels help others to understand why I prefer a mohawk to l…
Read more

I know how you feel. You're searching for lesbian clubs in NJ, and you're being directed to New York City. Well, there's two reasons for that: New York City has some of the best lesbian events and lesbian clubs in NJ are scarce.
Awhile back I reviewed some of the top lesbians clubs in NYC. Although New Jersey's nightlife will never be as vibrant as New York's, there are still some establishments dedicated to the gays, so let's talk.
iKON Formerly known as Deko Lounge, iKon is one of the most well-known clubs in Central New Jersey. Back when it was Deko, this was the go to joint for my friends and I because it was a guaranteed good time. There are 3 different rooms with music ranging from techno to Latin to hip-hop and the drinks are cheap! I celebrated a birthday here with all of my friends, and it was one of the most memorable occasions.

Unfortunately, much has changed, and since a new owner took over the club things have changed. Today, iKon is mainly a boys cl…
Read more

After reading an AutoStraddle.com post featuring The Dalloway (a trendy SOHO lesbian bar that opened in September of 2012), I realized that the LGBTQ nightlife in NYC needs some reviewing from someone that is purely a patron. Luckily, I don't stand to gain anything from any of the places in NYC that I frequent, so I can be as straight forward as possible.

As a black lesbian in this beautiful city, it has not always been so easy finding a bar or club that has just the right scene. Fortunately, my circle has expanded and I have been introduced to more lesbo-centric bars and nightclubs than necessary. I imagine the perfect lesbian bar/nightclub with a hard femme decor, diverse music, moderately priced drinks (with drink specials), dance space, lounge area, hot bartenders, bar food(wings, sliders and salads) and NO COVER. That is the perfect place no matter who you want to sleep with, but since we're here for the queer, let's stick to one portion of the population.

I have a theory and I hope my words are chosen properly.
I believe that transgender people or people of trans experience are neither male nor female, but a gender all to themselves. It's hard for me to say this because I know many FTM/MTF people, and I wouldn't want anyone to take offense. Here I go...

A man that transitions into a woman has experienced manhood and womanhood. That person has straddled both sides of our societies gender roles. I don't believe that, this man is now a woman because he now has breasts like mine and a vagina to match. I believe that person is now part of a different gender. A gender that is superior to male or female because that person has experienced both sides of the spectrum, while maintaining properties that add a dual nature to this person. I'm aware of my use of the word "superior", but I believe it is used correctly. Superiority in this sense, is used to acknowledge that transgender people have a dual experience that no cis…
Read more

Another online dating story to follow up the first one:

One day, I was sitting with my mother, and we started talking about ways to meet people. I stressed to her the necessity of going out and meeting people in person. I told her that there is nothing compared to just meeting someone at a bar, while shopping, or through unexpected conversation. She told me that it's not the same for her generation. She believes dating for a middle aged woman isn't as simple as going to a bar and hoping for the best. I was instantly reminded of a conversation I had with a college friend, and he said that his father felt online dating was the only way he would find love. We were both perplexed that our intelligent parents could be so wrong.

For my generation, the internet is a means to hooking up. This phrase has several different meaning to different people, but one thing stays the same; hooking up is NOT long term. It's a temporary thing that only leads to a lasting relationship if the tw…
Read more

"I'm just so excited to meet him!" she said with glee. "It's been so long since I've had such a connection with someone." These were the last words she uttered to me the day before her date stood her up. She had recently worked up the nerve to start online dating, and through Match.com she thought she had found love. He was tall, dark and handsome just like she likes them. They had been speaking for about two weeks, so meeting each other and hitting it off would be the icing on the proverbial cake.
What could go wrong? They had spent hours on the phone, started calling each other "baby" and most of all he was a great listener.
Her: "I just don't know why he could't have called?" Me: "Well, sorry ass people do shit like that..."
Her: "It would have been okay if he had just told me he couldn't make it. I was so excited to meet him." Me: "On to the next one, girl."
Her: "Do you think I shoul…
Read more